The Dangers of Shock Marketing and Burger King's New Example of How Not to do it. 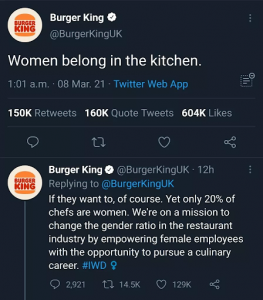 It was the first tweet in a thread of three, with the second immediately starting with “if they want to, of course”, designed to bring attention to the fact that only 20% of chefs are women, and that they are launching a female-only scholarship designed to help their staff become chefs.

The ambition was likely good, but the execution quickly became all anyone was talking about. The first tweet had hit over 1M retweets, quote tweets and likes, without mentioning the comments which were well over the 200k mark.

The fall off in engagement to the second two parts of the thread, where the meat of the message was, was huge. You can see in the image to the left that while tweet 1 had over 900k engagements, tweet 2 had less than 200k. The aim of drawing huge attention to the campaign with an incendiary opener had worked in that it brought eyes to the campaign. Crucially though, it failed to convey the message. 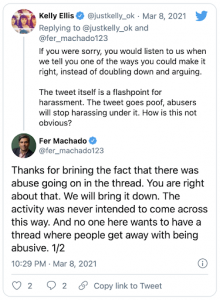 Herein lies the inherent danger of shock advertising, or ‘shockvertising’. That the message gets lost in the delivery. Burger King wanted to highlight the massive lack of diversity among chefs, and instead what they did was provide a platform for a large amount of abusive messages, thinly disguised as ‘banter’.

Fernando Machado, global CMO for Burger King parent company Restaurant Brands International, defended the intent of the campaign throughout the day but acknowledged that sharing a notoriously sexist trope like “Women belong in the kitchen” without immediate context was a mistake.

About 12 hours after launch, the tweet was taken down, with Machado and Burger King UK both tweeting that the campaign was executed incorrectly, and though they stood by the message, they understood and accepted the criticism and changed it.

Interestingly, the exact same copy was used by Burger King elsewhere: On a full page ad in the New York Times. 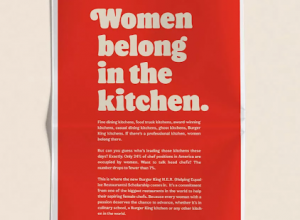 In print form, where it was much harder to miss the context of the post, the ad likely had the correct impact. It grabbed the attention and drove home the message that Burger King wanted.

But it also highlights the importance of having defined and diverse strategies on various media. Just because it made for a potentially strong print ad doesn’t mean amends shouldn’t have been made for a notoriously difficult platform like Twitter.

This blog isn’t supposed to be purely a bashing on Burger King though. It highlighted a really important issue, and with improved execution, could have had a fantastic impact for all the right reasons. Shockvertising is famously hard to execute correctly, but it absolutely can be done, and has been for decades. 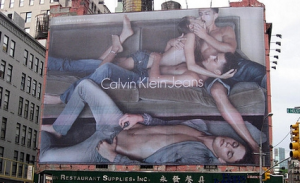 What is ‘Sex Sells’ if not an early version of it? That adage, though now outdated (supposedly), has been around marketing for as long as it’s been an industry, and proved correct for a long time.

Calvin Klein Jeans, in 2009, took over a Soho billboard with an image showing sex in a non-conformative manner, and it set off many a family group.

The success of that campaign is up for debate, but what isn’t are the likes of the UK’s Think! Road Safety video ads. Long time executors of the shockvertising methodology, they have been running video ads that are impossible to forget since as early as 2008.

Their 50th anniversary campaign in 2014 is still hauntingly powerful and effective. On YouTube alone, it’s garnered nearly 1.3 million views and it’s not surprising:

Shock advertising is the epitome of easy to do, hard to master. And if you aren’t going to get it right, probably don’t do it. Unless you truly believe that there’s no such thing as bad publicity, getting it wrong is more likely to hurt than help.

So, let’s go back to Burger King. The tweet has now been deleted, and an apology released. The campaign was supposed to go out in the UK, Brazil and Mexico among others, but never saw the light of day outside the UK. But could they have done it right? Potentially. 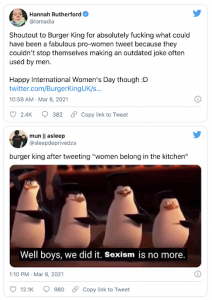 As was pointed out by one user, the first two tweets could have been combined into one, immediately relaying the key message, while also utilising the attention grabbing one-liner. Instead it could be argued, as that user did, that they “used sexism as clickbait”. If they had combined the two into one, it arguably wouldn’t have reached as far, but it also would have conveyed the message better.

We will never know the truth, but it comes down to the internal ambitions of the campaign. Was the importance of the message truly what they wanted to relay? Or were they just trying to get attention to a platform that doesn’t generate much engagement for a following of nearly 90,000 in Burger King UK?

The tweet is now gone, and it will go down as one of the latest examples of divisive shock advertising, likely to be taught in marketing classes in the future. Regardless of whether you think it was a good or bad activation though, at least we can unite in enjoying some of twitter’s finest responses.