Thomas Carlyle’s ‘Great Man’ theory supports the thought that great leaders are born and not made – that certain individuals come into the world with characteristics and abilities that enable them to shape the very history of our world.

These days, Carlyle’s theory is predominantly rebuked by historians, with most believing that demography, climate and technology have a much greater impact on ordinary people’s lives than kings, presidents and leaders. However, the theory still holds weight in journalism with recent media emphasis on Trump’s presidency and European elections.

In his column for the Guardian, Simon Kuper suggests that this focus on personalities instead of trends is misleading. Just as the smartphone did more to shape the past few years than Barack Obama, Kuper explains that it will be tech not Trump, that will hold a greater influence over the next few years.

Between virtual reality and the idea of the rise of a robotic workforce, much is expected to change throughout the duration of Trump’s presidency. Virtual reality is believed to become mainstream sooner than we think – with Zuckerberg putting the time frame at 5 to 10 years.

By simply putting on a VR headset, you will be able to enjoy a romantic date on an exotic beach, or a front row seat in Camp Nou watching Barcelona FC. The younger generation may risk falling victim to ‘reality disassociation’ – a new psychological disorder in which young people will find difficulty in deciphering what’s real and what isn’t.

Tech advances will also see an increase in average lifespan with the introduction of body sensors that remind you when you need to take your medicine and warn you before a heart attack occurs. With increased lifespan comes the need of increased care, and this is where robots and virtual reality will work hand-in-hand.

Robot carers are already being built in Japan, where 20% of the current population are aged 65 or older. As well as robots that help with physical lifting and carrying, these also include robots that flag unusual activity in the household. For example, if an elderly person hasn’t boiled their kettle at the usual time, the robot signals this to a VR carer who will check on the situation by virtually stepping into the flat. One VR carer could ‘visit’ 30 elderly people a day.

It is not difficult to see that within a decade, our world will function quite differently. Although in a time of huge political shifts with massive personalities behind the steering wheel, it won’t be these leaders who shape this change. As Kuper explains – Trump may imagine himself as the rider guiding the horse of history, while in truth, he is ‘hanging on to the horse for dear life as it carries him in directions he never imagined’. 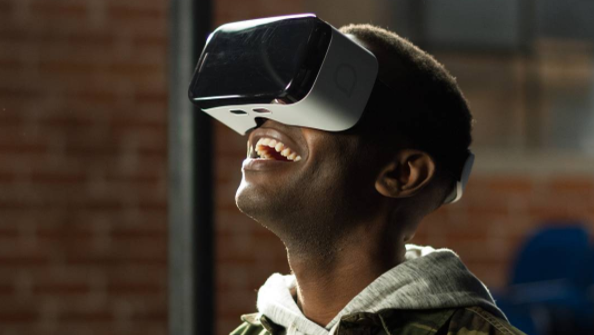